The Language of Light

With many ancient sites and artifacts being uncovered around the globe and the assistance of our modern day computer era and internet, it has become increasingly apparent, how many similarities arise, when researching ancient texts and symbols, raising the question of its origins and original meanings?

Throughout the world ancient texts and symbols in the form of rock carvings, hieroglyphs, petroglyphs and the alike are gradually being discovered. Many identical symbols have been found in different countries situated at vast distances from each other. Although not all of the symbols found across the globe are an exact copy of each other, the striking similarities leaves one with the assumption that all languages trace back to a single common source… The Parent Civilization.

In many parts of the world, archeologists and researchers are uncovering this archaic form of Sanskrit now recognized as a precursor to all known languages in every region where they are found. Translations and grammar suggest a global human culture thrived in antiquity.

In the Sinai the language has been given the name "old Negev," For centuries in Australia it has be known by the name "Panaramitee," It has been misrepresented as Native American Indian sign language in the America. The language and grammar are now understood to be proto-Canaanite and appear to have roots in common with Egyptian and Hebrew. The petroglyphs successfully translate to English using an old Hebrew dialect in all three locations.

Evidence of the antiquity of this script in both America and Australia suggest that this root language may pre-date that of the Hebrews. The team who made the discovery suggest using an unbiased name, such as "the First Tongue," to avoid any presumptive association with a specific people or era. The content of the translations, although not complete, suggests a common culture and spiritual belief system.

The records of the 'Koori People' (Australian Aborigines) are inscribed upon the rocks of this land, and one of the patriarchs of our race, 'Kingajanik' goes back 50,000 years ago, and as a race the 'Koori' people go back to a time even before this. The 'Koori' people are the oldest race upon this planet, undisturbed by wars of conquest by outsiders, or the mixing of blood, we were until the whiteman came, the purest racial line on earth.

The beginnings of the 'Koori' race was 'Baiame' and yet inscribed upon the rocks of 'Innaminka' in South Australia, is the record of another race of people that once inhabited this island continent before it became part of the frozen south, before 'Baiame' and before the 'Koori' peoples. We simply refer to these people as the 'Old Ones'. - The Book of Yahi 'Boomba Djunebun' 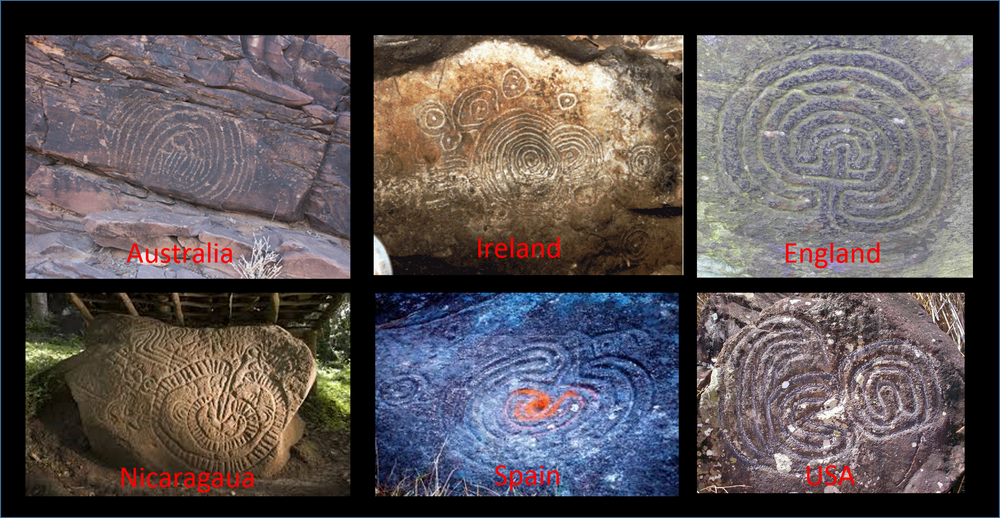 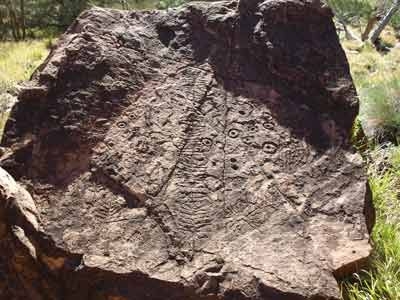 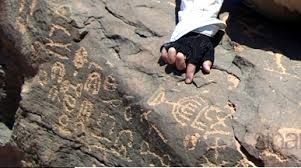 In Australia, this alphabet has been found in many locations and adheres to the grammar and structure of the other known petroglyphs on the other two continents. Ironically, instead of considering the similarity to other archaeological sites around the globe as evidence of a global culture, the scientific community in Australia has denied the possibility that this is any type of "system" at all, either writing or storyboard. The concept that these odd shapes somehow formed a system of communication was first put forth by Lesley Maynard. Maynard received overwhelming resistance to his assertion and he finally discontinued his efforts. By the late 1980s, there was virtually no interest in these petroglyphs. In 1995, Bednarik reported the results of his experiment to see how readily the Panaramitee Tradition could be recognized. He sent drawings and pictures of several examples of petroglyphs to various rock art scholars around the globe. Ninety-eight (98%) percent wrongly identified petroglyphs from the United States, Africa and Europe as being Panaramitee Tradition. Bednarik summarized as follows,

"It is either not possible to identify the Panaramitee style, or... this is a world-wide style." - Josephine Flood - Rock Art of the Dreamtime

Giving the very ancient history of the Australian Aboriginals, and the words of Boomba Djunebun, we can assume that the dating given of three to four thousand year old, needs to be revised. If the petroglyphs found here in Australia, are of an extreme similar pattern found in other areas of the globe, and the elders tell us they belong to the race which preceded them, surely we are looking closer to at least 50,000 years. An ancient race, which we are told, migrated north, when the earth tilted on its axis and moved this southern continent closer to the South Pole.

The following quote I found quite profound, as it in my opinion, is very true to form.

And the whole land was of one language and of one speech. . . . And they said, Go to, let us build us a city and a tower whose top may reach unto heaven. . . . And the Lord said, behold, the people is one, and they have all one language. . . . Go to, let us go down, and there confound their language that they may not understand one another’s speech. So the Lord scattered them abroad from thence upon the face of all the earth. Genesis XI. 1-9

Although there is still more spread sheeting to be done, this is a small example of similar symbols found globally.

The lost Enochian knowledge reveals the mother tongue as a "Language of Light". Known to the ancients as HIBURU, it is the primal seed language, introduced at the beginning of this time cycle. The alphabetic forms emerge from luminous flare patterns of the brain. It is a true language of light, coursing through our very nervous system. - - The Lost Art of Enochian Magic – Dr. John Dee

The introduction of the Keys of Enoch (JJ Hurtak) explains that the Enoch Keys were given through a holy scroll of burning Light, where geometries pulsated out of the scroll, giving wisdom to the receiver. According to Enoch the ancient Egyptian-Hebrew-Tibetan-Sanskrit-Chinese tongues are to be used, because they still connect with the Masters of Wisdom.

Hiburu is a harmonic language, mimicking the waveform properties of light. The "keys" Enoch speaks of, turn out to be sound keys, keys to be vibratory matrix of reality itself. The Enochian knowledge describes sonic equations, encoded within the ancient mantras and god names, capable of directly affecting the nervous system and creating a profound effect of healing and higher states of consciousness.

A personal experience obtained whilst in Egypt on tour with brothers Robert & Jean-Paul Bauval and Graham Hancock in April of 2011, visiting the Karnak Temple in Luxor. I put my forehead to one of the enormous stone block walls (a short ceremony shown to me by one of the Temple guards a few days earlier, which entailed touching hand to forehead, hand to heart, repeated three times, then forehead to stone). What I received, I will never forget. In my third eye, I was being downloaded hundreds of geometric patterns in a matter of minutes. I could not even recall what they looked like as they were coming in so fast, I returned from that journey with some remarkable new insights.

Aunty Beve ( a friend and mentor), was one of the last remaining fully initiated Tribal people of the aboriginal Darkinjung Tribe in the Gosford area. She once mentioned that it was common practice for an initiate to learn a new symbol at each stage of the initiation. It was always known what stage of initiation a student had achieved by how many symbols the initiate had attained.

With all this in mind, I have to wonder if the areas of petroglyphs, which are known to be sacred sites all over the world, are areas of initiation ceremonies?

According to legend, the science of spiritual liberation also known as alchemy, illumination, enlightenment, transfiguration or ascension, was a gift to humanity from the previous civilizations 'The Old Ones', with the purpose of embodied liberation of the human soul, whereby ones evolutionary soul consciousness is accelerated to completion. The science of transformation was the highest valued knowledge and the ultimate test of the human experience to the ancients. Suppression by orthodox religion has fragmented the truth and forced the knowledge underground into mystery schools and secret societies. It has been referred to as the Perennial Philosophy or the Underground Stream of knowledge due to its hidden nature encoded in symbols, myth, and scripture.

Note: It is a time consuming task to share the many varied petroglyphs found on this planet, I would highly recommend you use a search engine for petroglyphs and click the images only links.